As part of our 150th anniversary celebrations your Council supported the idea of holding an anniversary field meeting. To this end it was thought fitting to hold it at Hadleigh Country Park (TQ 800 868), a chalk downland site with salt marshes bordering the Thames estuary, which it overlooks, near Southend, South Essex (VC18). The site has Ample parking at £6.80/day, a café and toilets. This area was the locality for the South London Entomological Society‘s (as we were then) third ever field meeting, held on 26 July 1890: 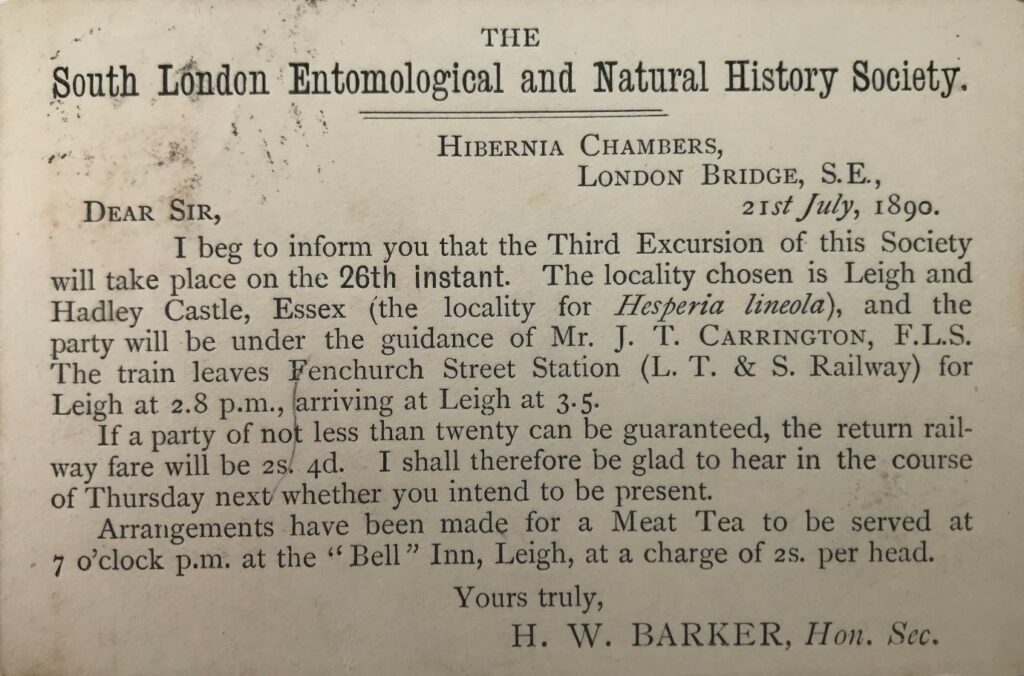 This meeting is doubly important to the history of our Society as not only was it one of our first “excursions”, as they were called then, but it was the first field meeting for which records were published (T. D. A. Cockerell, in: Abstract of Proceedings of the South London Entomological and Natural History Society, 1890). Indeed, the published list of species from that meeting, covering birds, (1), amphibians (2), reptiles (1), molluscs (25), Crustacea (2), arachnids (1), Coleoptera (9), Hymenoptera (1), Orthoptera (1), Lepidoptera (23), Hemiptera (2), Diptera (10), Neuroptera (3), Hemiptera (2), Annelida (1), Protozoa (1), Algae (3), Fungi (3) and plants (145), is more extensive and detailed than the level of reporting of records from our current field meetings. This detailed publication of the 1890 records will enable a comparison to be made between what they found them and what we find today.

Clearly, in 1890 Hadleigh was considered THE locality for the recently described Essex Skipper Thymelicus (Hesperia, Pamphila) lineola (Ochsenheimer, 1808). As their published record of T. lineola is the only one where any indication of abundance is given (“common”, although exactly what this means is not stated) it will be interesting to assess its abundance/presence at this site today.

Although no formal list of attendees at that meeting was published it is possible to glean the names of some from the published list of species as some of the records, particularly of the Lepidoptera, are credited to the persons making then. It is likely that Mr. T. D. A. Cockerell, who published the species list, and our honorary secretary at that time Mr. H. W. Baker, who sent out the invitation cards to members, were at that meeting. Those who have records credited to them and were definitely there include:

Full permissions have been obtained from the various landowners (English Heritage, Salvation Army and the Hadleigh Country Park). Light trapping can be undertaken on Saturday night to Sunday morning. It is unlikely that light trapping was used back in 1890, so comparison of today’s Lepidoptera and other groups that come to light with those on the historic list will be somewhat biased.

For those who want overnight accommodation please make your own arrangements. On Friday night the leader and others will be staying at a near-by hostelry, The Bell Inn, at Horndon on the Hill (TQ6783): (https://www.bell-inn.co.uk/things-to-do/)

Although a 15th century coaching inn, unfortunately this is not the same Bell Inn mentioned in Mr. Barker’s invitation above, where those attending the 1890 meeting no-doubt enjoyed a “meat tea” for 2 shillings (10p) a head!

It is proposed that those attending meet in the car park area of the Country Park at 10.30 on the morning of Saturday 23rd July.

If you need further information about any of our events please get in touch.